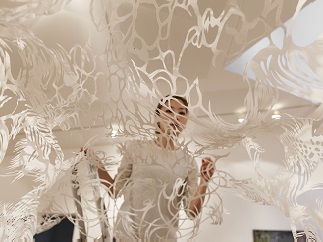 A Paper cut sculpture in gold
A New Commission for the Holburne Museum, Bath
Saturday 24 October 2015 to Sunday 24 January 2016

Japanese paper cut artist Nahoko Kojima creates spectacular intricate sculptures from single sheets of paper cut by hand. Previous work includes ‘Cloud Leopard’ that was selected by the Crafts Council to be shown at Collect at the Saatchi Gallery in 2012. Nahoko Kojima will create a new work for the Holburne to be displayed in the Wirth Gallery. The Holburne’s collection includes a number of important pieces of historical paper cut works including a bear cut by Mary West in about 1709.

Nahoko Kojima was born in Hyogo, Japan in 1981. Nahoko began her training in Japan in paper cuts at the age of 5. After graduating with a degree in Design she briefly pursued a career in Graphic Design in Tokyo before moving to London in 2005. Her first paper cut show in London was in 2007 where she exhibited ‘The Five Senses’ Collection at the Epicurean Lounge.

By 2009, Nahoko was cutting professionally and opened her studio in 2010, working on commissions including the full colour Alice Collection, based on the book by Lewis Carroll.

Nahoko’s ‘Cloud Leopard’ illustrated the Artist’s pioneering technique of turning traditionally flat, wall hung pieces into floating sculptures. Her next major show was in 2013, where Nahoko was awarded the Jerwood Makers Open commission and unveiled the same year her next piece ‘Byaku’ (meaning ‘white’ in Japanese). It took 7 months to make. It is life-sized Polar Bear cut using only one 3m x 3m sheet of white Japanese washi paper. In 2014, Nahoko unveiled Washi, a life-sized Bald Eagle made from a single sheet of paper in her debut American Show at the Gerald Ford Presidential Museum in Grand Rapids MI, USA.

For the Holburne Museum, Nahoko is presently working on the concept for the work that will be displayed in October 2015. The Artist wants to create a piece that connects with a concurrent show at the Holburne Museum Gold. An exhibition from the Royal Collection.

Quote by the Artist:
“Every time I like to face new challenges and make pieces that the viewer can enjoy and something that makes them smile. This exhibition is very dear to me as it facilitates the process of the development of my Art.”

Thursday 14 January, 6.30pm – 7.30pm
IN CONVERSATION
Nahoko Kojima and Shari Solo
£10/£8 concessions
Join Japanese paper-cut master Nahoko Kojima for a rare discussion of her artistic practice with Shari Solo, Creative Director of Solo Kojima. A global pioneer in the sculptural application of paper cut, Kojima has championed this traditional art form, constantly developing and nurturing it by involving and educating many newcomers to the field. The evening will reveal the inspirations, themes and design processes which have shaped Nahoko’s spectacular work.