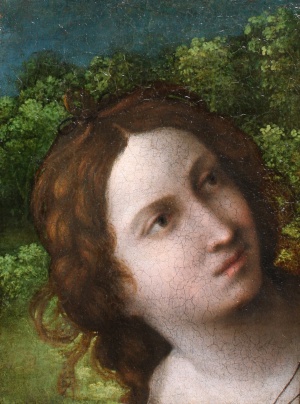 As a visitor to Sir Thomas William Holburne’s house at 10, Cavendish Crescent in 1867, you might well have been shown into the front drawing room on the first floor. You would scarcely have noticed the beautiful view over the High Common into the Avon Valley, as your eye would have been drawn immediately to the 15 tables, 21 chairs and over 100 pieces of “Ornamental China and Curiosities” arranged about the room, not to mention the grand piano and of course the densely-hung collection of paintings.  Every inch of wall must have been covered with pictures of all shapes and sizes, from grand history paintings to delicate little cabinet pieces.

Five of the most precious cabinet paintings were given pride of place in mahogany cases.  Among them, Holburne listed a ‘Female Head, very fine’ by Leonardo da Vinci.  As one of his proudest possessions, Holburne lent it to the Leeds International Exhibition of Works of Art in 1868, placing a label on the back of the frame that read:

This exquisite female head by Leonardo da Vinci was brought from Italy, nearly 70 years ago by the late Thomas Barker, so celebrated for his woodmen, and sold amongst a collection of his pictures at Landsdown [sic] Grove, Bath, Belonging to Sir Edward Cockburn Bart., in Jan 1861.

By 2007, the painting was so dirty that it was hard to tell what it was, although we assumed that, as with most of his paintings, Holburne had been a little over-ambitious in his attribution and we weren’t about to rediscover a lost “Da Vinci”. Previous curators and their expert advisers had suggested that the painting might have been made by a 16th-century Milanese pupil or follower of Leonardo.  The reference by Sir William to his Sion Hill neighbour Thomas Barker (1769-1847) set alarm bells ringing: Barker was celebrated not only for his woodmen, but also for imitations of old masters.  Was what Barker “brought from Italy” really a genuine Renaissance work?

The only way to find out was to clean the painting and remove at least a century of grime.  The tiny canvas was sent to Helen White, who carefully removed the old dirt and varnish.  To our surprise and delight, what we found was a beautiful fragment of a true Renaissance painting: a delicate head tilted upwards with a slight smile, as though gazing at something lovely.  The murky grey background became a forest of vivid green, and details of the girl’s plaited hair emerged, bound with a fine ribbon.  Although the surface of the painting was heavily crackled, we decided not to fill or retouch the cracks but to interfere as little as possible with the artist’s work.

The next stage in our investigation was to find out more about who might have painted our head. Colleagues at the National Gallery kindly offered to look at it for us, and the little canvas travelled to London with Gainsborough’s Byam Family. The Holburne’s Trustee Luke Syson, Curator, Italian Painting before 1500, arranged for an international panel of experts to look at the fragment, led by his curatorial assistant Arturo Galansino. They have agreed that it must be the work of an artist working in Mantua around 1525, during the late period of Isabella d’Este (1474-1539).  It relates closely to faces by Lorenzo Leonbruno (1489-1537) and other pupils of Lorenzo Costa, who worked for the Gonzaga family in Mantova between 1504 and 1535, shortly after Mantegna.

One mystery remains: who is this young lady?  She has obviously been cut from a larger work, but was it sacred or profane?  Is she a goddess or theological allegory?  A nymph or a saint?  We may never know.