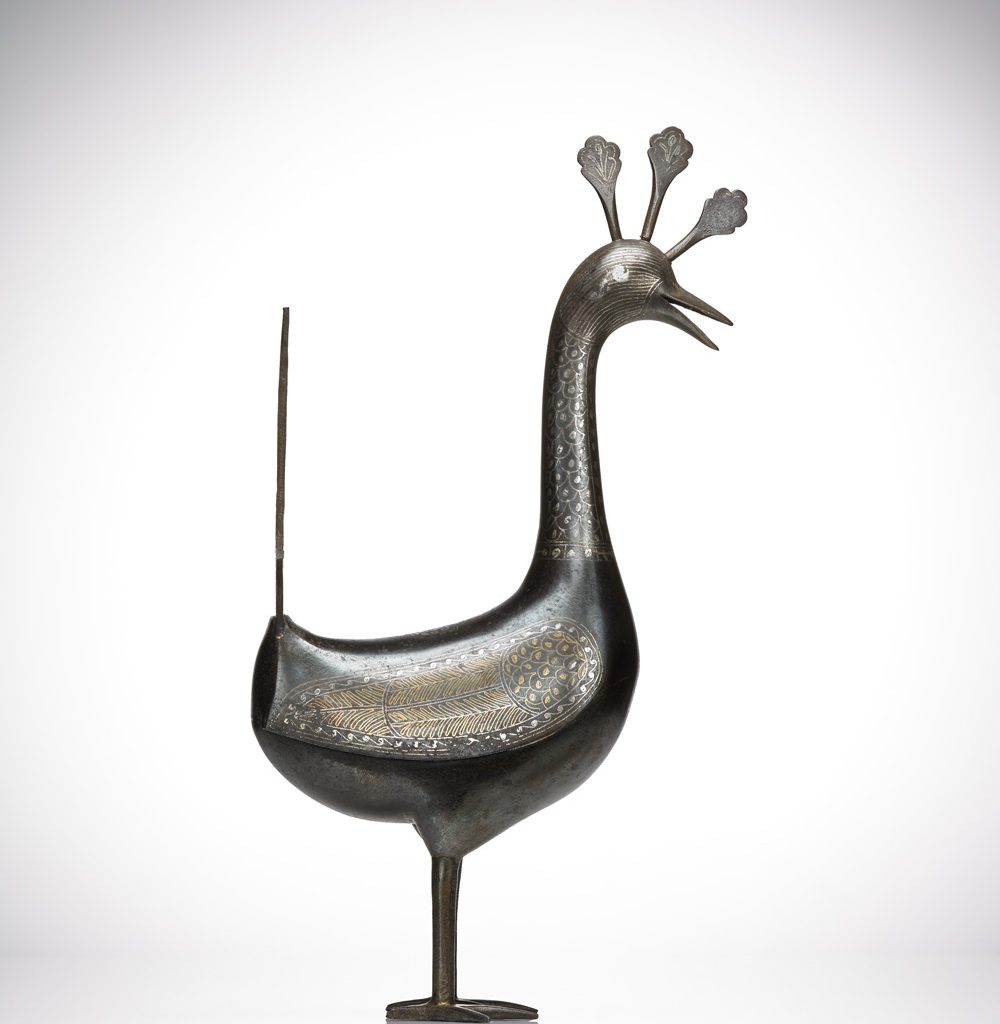 Sumptuous textiles, delicate carved woodwork and lacquer and elaborately decorated metalwork from the collection of Ellen Tanner, on show for the first time following a major conservation project.

Ellen Georgiana Tanner (1874-1937) was among the first British women to travel solo to the Middle East. In 1894 she set off by steamer to Baghdad, Iraq, beginning a journey overland on horseback into Persia (now Iran) accompanied only by local guides, staying in caravanserais along the route, and exploring the bazaars of Baghdad, Shiraz, Teheran and Isfahan.

Born in Frenchay near Bristol, Tanner received an inheritance of £18,000 which enabled her to travel, first in Europe and then further afield. Following Bristol, then Corsham, she eventually settled in Bath after “years of almost constant travel, having visited nearly all the corners of the globe,” and gave a series of gifts of Middle Eastern art to the Holburne Museum. The collection reflects the richness of secular Middle Eastern figurative and decorative art traditions.

Catrin Jones, Curator of Decorative Arts at the Holburne notes, ‘It has been so exciting to explore the untold story of Ellen Tanner and to discover and share her collection for the first time. Ellen Tanner is not well known as a woman traveller like her contemporaries Gertrude Bell or Isabella Bird, and it has been a busy few months as we have discovered more and more about her journey and experiences of travel in the Middle East.
Tanner’s story can tell us so much about our own troubled times: it’s a chance to celebrate a pioneering woman and the extraordinary artistic and cultural output of the Middle East, but also a salient reminder of Britain’s history of empire. The huge success of our Big Give crowdfunding project enabled us to conserve more of Ellen Tanner’s collection than we had expected – 61 objects conserved by 7 conservators over the past 4 months! – The objects have been transformed and finally do justice to the intrepid woman who collected them and the exhibition will be full of unusual and beautiful art from the bazaars of Iran and Iraq in the late 1890s.’

Between 1917 and 1932 Ellen Tanner donated over 85 items to the Holburne, the range of objects is quite striking: several pieces of chased silver, Persian shellac mirrors and pen cases, an incised brass hookah, a pair of elaborately carved pearwood sherbet ladles, embroidered and woven textiles including a large quilt, textile and carved wood boxes, large incised brass vases and beautiful damascened peacock and hawk. Handwritten notes describing the objects and where she bought them survive for a number of objects.

Miss Tanner eventually settled in Bath, where she died in 1937. She is buried at Lansdown Cemetery. Her legacy tells a fascinating story about her life and interests, as well as her view of the world, and the east, as a late Victorian during an age of empire.

Events Inspired by Bath to Baghdad

Friday 17 August, 6–9pm
FOOD & MUSIC EVENING EVENT
A Taste of Persia:
Food and Music from the Middle East
£15 (Bath to Baghdad and Garden Café open 6–9pm)
For one night only, sample the tastes and sounds of Persia in our Garden Café with food from Simi’s Kitchen and traditional Middle Eastern folk music from Mazaj. Inspired by our new display, Bath to Baghdad, this event will bring to life the Persian world as experienced by nineteenth-century traveller, Ellen Tanner.

Wednesday 12 September, 1–2pm
COLLECTION IN FOCUS
Journey to Persia:
Miss Tanner and her collection
Catrin Jones (Curator of Decorative Arts)
£7
Ellen Tanner was among the first Western women to travel solo to the Middle East. Discover the story of Miss Tanner’s travels from her first visit in 1894 to her later gifts of Persian art to the Holburne. This talk will discuss the context of an extraordinary collection of metalwork, textiles and more, on display for the first time following a major conservation project.

Saturday 22 September, 6–9pm
Screening begins at 6.50pm
FILM SCREENING
Letters from Baghdad (PG)
With introduction by Kate Vandor
(Curatorial Fellow, Holburne Museum)
£7 (Bath to Baghdad open 6–7pm, Garden Café open for drinks, 6–7pm)
Join us for a screening of Sabine Krayenbühl and Zeva Oelbaum’s film, Letters from Baghdad, which tells the extraordinary true story of Gertrude Bell and her journey into the Arabian Desert after the First World War. Often described as the most powerful woman in the British Empire – more influential than Lawrence of Arabia – Bell shaped the Middle East in profound ways, helping to create Iraq’s borders and to found the Iraq Museum.

Thursday 27 September, 7–8pm
EVENING LECTURE
In Search of Adventure:
Female Explorers, Past and Present
Jacki Hill-Murphy
£10 (Bath to Baghdad open 6–7pm, Garden Café open for drinks, 6–7pm)
Join explorer Jacki Hill-Murphy as she shares her research into history’s untold stories of the women who travelled to remote corners of the world in search of adventure. Jacki will recount her own experiences of walking in these women’s footsteps, including Isabela Godin’s travels along the Amazon River, Isabela Brooks’ expedition in the Andes and Kate Marsden’s journeys in Siberia.

NOTES
The Holburne Museum’s mission statement is ‘Changing Lives through Art’, signalling its commitment to opening up the enjoyment of art to people of all ages and from every walk of life. The Holburne was founded in 1882 with the gift of Sir William Holburne’s collection of 16th and 17th century Italian and Dutch paintings, silver, sculpture, furniture, porcelain and diverse objets d’art of national and international significance. That founding gift has been augmented with a collection of 18th century paintings by such artists as Gainsborough, Lawrence, Ramsay, Stubbs and Zoffany. Set within the historic Sydney Pleasure Gardens, the Museum reopened in May 2011 after ambitious renovations and with a new, award-winning extension by Eric Parry Architects. The Holburne has since secured a national reputation as an outstanding museum which holds critically acclaimed exhibitions. Its programme of exhibitions, commissions and events sets out to bring to Bath great art of all periods and from around the world, seeking to set the art of the past in dialogue with contemporary practice in exciting and dynamic new ways.