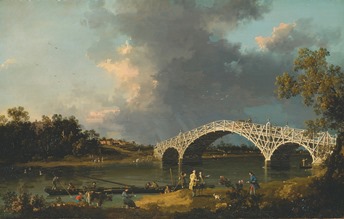 When the Venetian painter Antonio Canal arrived in London in 1746, Britain was booming. During his nine-year stay, the artist captured the latest achievements of British architecture and engineering. Including loans from Compton Verney, The National Trust, The British Museum, Royal Collection Trust and Tate, this exhibition also features Canaletto’s British followers and a review of John Wood’s reinvention of classical architecture in Bath.

Giovanni Antonio Canal (1697-1768), known popularly as Canaletto, is today remembered as one of Italy’s greatest view painters. His images of Venice were particularly popular with Grand Tourists from Britain. When war caused the flow of British visitors to Venice to dry up, Canaletto followed his patrons home to Britain, where he stayed for almost nine years from 1746 to 1755.

Through a series of astonishing canvases and drawings, Canaletto celebrated the accomplishment, success and prosperity of the rising British nation and its latest achievements in architecture and engineering. Canaletto’s London is busy but beautiful with its wealth of new landmarks: Wren’s Baroque churches, the majestic St Paul’s Cathedral and the naval palaces of Greenwich; Hawksmoor’s ‘Gothick’ towers for Westminster Abbey, William Kent’s new Palladian Horse Guards building and the Rococo pleasure gardens at Vauxhall and Ranelagh. The construction of two marvels of engineering, the new bridges across the Thames at Westminster and Walton, is documented in detail.

London and its river are also seen through the eyes of two of Canaletto’s British contemporaries, Samuel Scott (1702-1772) and William Marlow (1740-1813), whose monumental canvases were both inspired by admiration of the Venetian master and stimulated by the challenge of his success. Since a Canaletto exhibition would not be complete without views of Venice, Canaletto – Celebrating Britain opens with some of the artist’s finest views of Palladio’s churches.
The exhibition will conclude in the Holburne’s Wirth gallery with an exploration of Georgian Britain’s patriotic fascination with its ancient past, the cult of King Alfred and John Wood’s recreation of King Bladud’s legendary citadel at Bath in a re-worked ‘British’ classical style.

Canaletto: Celebrating Britain has been curated by Compton Verney and following its run at the Holburne will travel to Abbot Hall in Kendal.