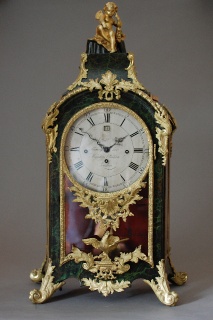 In 1990 the Museum was bequeathed a rare and beautiful musical bracket clock made by Georg Philip Strigel around 1775. Strigel held the appointment of Watchmaker to Queen Charlotte. He was described as the ‘blunt, high-dried, honest German’ who ‘had the care of his majesty’s clocks’ and was once interrupted by the George III whilst attending to a clock dial at Buckingham House, ‘standing upon a stool, placed upon a table, his hands extended above his head’. Clocks by Strigel are extremely rare: two from the collection of Queen Charlotte survive in the Royal Collection.

The poor condition of the case and movement meant that this remarkable clock was removed from display several years ago. Some readers may remember it sitting somewhat forlornly in the corner of the old Curators’ Office. The japanned case, decorated to resemble green marble was severely flaking and the gilt brass mounts were loose, tarnished and dirty. Inside, the movement had long ceased to play any recognisable tune.

It was always the ambition to fully conserve this beautiful clock and to have it fully working in the newly restored Picture Gallery. Generous grants from the Leche Trust and from a private individual have contributed towards the cost of achieving this. In July the clock case was sent to Alexander Schouvaloff, a conservator who specialises in japanned and painted surfaces. He stabilised, cleaned and retouched the japanned ‘marble’ decoration and cleaned the gilt-brass mounts. The movement is currently with Thomas Ellis-Rees, an horologist to the National Trust. It has three trains for going, striking and playing four tunes on ten bells with a pull repeat mechanism. The tunes are entitled Lord Coventry’s Minuet, Belleisle March, Minuet and Country Dance. The clock case is already looking absolutely splendid and once the movement is fully working and playing the clock will make a truly magnificent addition to the Picture Gallery.