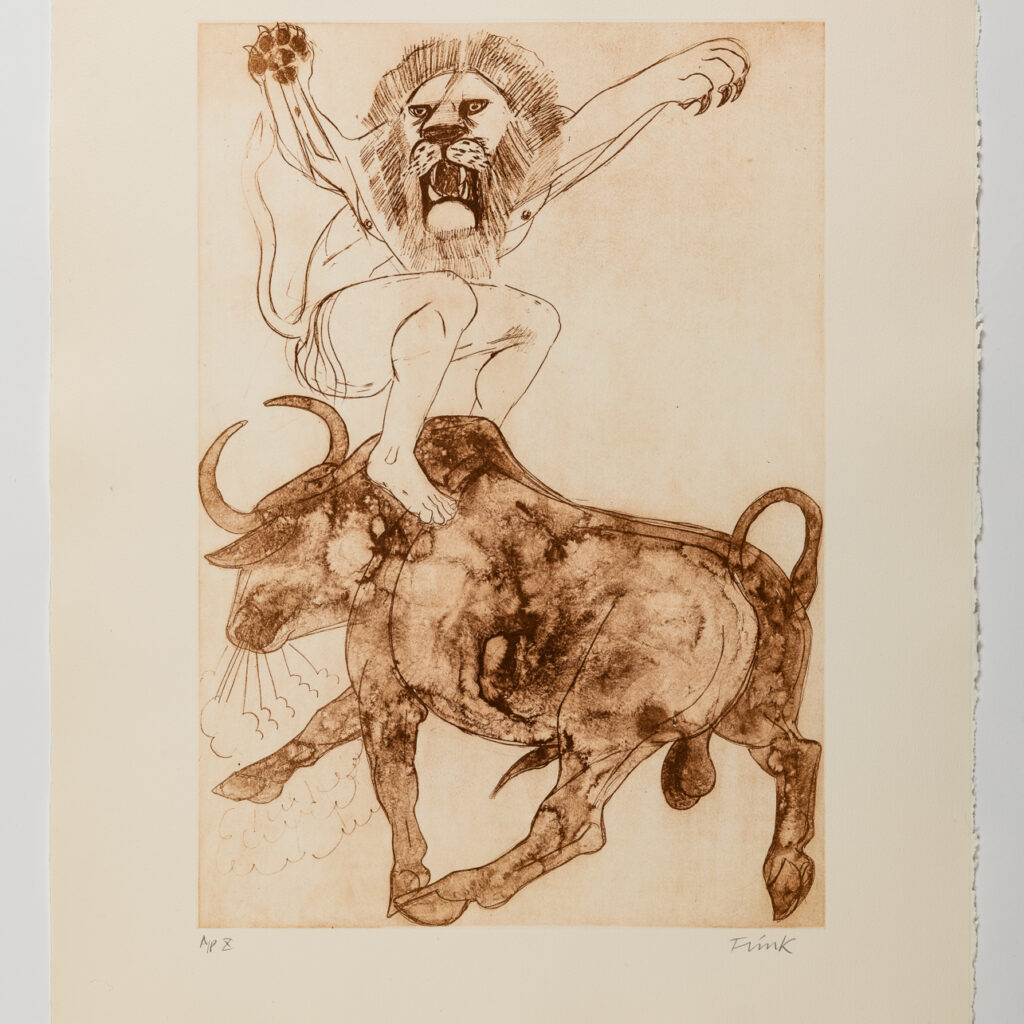 In 2019 the Holburne received a bequest of 35 objects from the estate of sculptor Dame Elisabeth Frink (1930–1993). The artworks included sculptures, drawings, etchings, and screen prints. A new exhibition will celebrate this important acquisition by showcasing a selection of the works.

Featuring themes such as storytelling, animals, humour and violence, Elisabeth Frink: Strength & Sensuality is the Holburne’s first opportunity to show a selection of Dame Elisabeth Frink’s bronzes and works on paper. The 11 works included depict her unique take on some of the most loved and well-known tales from Chaucer’s The Canterbury Tales and classical Greek mythology, in her Children of the Gods series of etchings. Together, they examine an almost unknown, or indeed forgotten, but important aspect of Frink’s career, as a storyteller and printmaker. Visitors will also be able to see a number of Frink’s best-known motifs, winged figures, male torsos and horses.

“Considered a masterpiece of medieval literature, Chaucer’s The Canterbury Tales is a collection of stories told by a group of pilgrims while travelling to the shrine of St Thomas Becket in Canterbury. Children of the Gods was a volume of Greek myths by Kenneth McLeish (1940–1997) and illustrated by Frink. The works are brimming with energy and movement as humans and immortals share the same space. Both combine humour with tensions between vulnerability and brutality, life and death,” explains Chris Stephens, Director of the Holburne Museum.

The Canterbury Tales series – made in the early 1970s – also depicts a striking contrast of reverse silhouetting of figures and animals, and starry, striking backgrounds, perhaps indicative of the experimental techniques Frink was exploring in her work at the time.

Two bronzes, Maquette for Torso (1956) and Homme Libellule IV (1966), will also be displayed alongside the prints, emphasising the motifs which run throughout her work. For instance, the winged figure in Homme Libellule IV resembles some of the characters that populate her Children of the Gods series, particularly in the case of Ganymede and Hermes.

Elisabeth Frink: Strength & Sensuality is devised in collaboration with a Bath Spa University student, Harriet Rhodes, as part of the Holburne’s partnership with universities in the area and our commitment to helping people develop a career in the arts.

Harriet says “Working on the Elisabeth Frink exhibition has given me a new perspective on the intricacies and hard work that go into organising an exhibition. Taking on a lead role has helped me to gain confidence in my own abilities and reinforced my ambition for a role in the sector. It has been wonderful to be welcomed so warmly into the Holburne community and I am extremely thankful to have worked with some extraordinary and rare pieces of contemporary art.”

Chris Stephens says this focused exhibition represents an opportunity for art-lovers to enjoy a rarely shown display of Dame Elisabeth Frink’s extraordinary prints: “Visitors will encounter the dynamic energy and experimental details in her printmaking, while also having the chance to discover a lesser-known side of one of Britain’s most important women artists of the 20th century.”

Dame Elisabeth Frink (1930–1993) was one of the 20th-century’s most exciting and individual British sculptors.

Born in 1930 into an army family, Frink’s childhood was overshadowed by the Second World War. This experience, and other upheavals of the 20th century, led her to ask fundamental questions about the nature of humanity in her work.

Elisabeth Frink was lauded in her lifetime. A sculptor and printmaker, she was associated with the post-First World War group of British sculptors, including Reg Butler and Eduardo Paolozzi, although her chosen subjects were rendered more naturalistically. Frink’s obituary in The Times noted the three essential themes in her work as ‘the nature of Man; the “horseness” of horses; and the divine in human form’. Frink made more than 400 sculptures in her 63 years, many of which are well-known public commissions. Frink created her work largely independently – unlike her contemporaries, she never employed assistants.

A CBE, she was also a Dame and a Companion of Honour. In 1973 Elisabeth Frink became the first female sculptor to be elected as a Royal Academician.

The Holburne Museum’s mission statement is ‘Changing Lives Through Art’, signalling its commitment to opening up the enjoyment of art to people of all ages and from every walk of life. The Holburne was founded in 1882 with the gift of Sir William Holburne’s collection of 16th- and 17th-century Italian and Dutch paintings, silver, sculpture, furniture, porcelain and diverse objets d’art of national and international significance. That founding gift has been augmented with a collection of 18th-century paintings by such artists as Gainsborough, Lawrence, Ramsay, Stubbs and Zoffany. Set within the historic Sydney Pleasure Gardens, the Museum reopened in May 2011 after ambitious renovations and with a new, award-winning extension by Eric Parry Architects. The Holburne has since secured a national reputation as an outstanding museum which holds critically acclaimed exhibitions. Its programme of exhibitions, commissions and events sets out to bring to Bath great art of all periods and from around the world, seeking to set the art of the past in dialogue with contemporary practice in exciting and dynamic new ways.