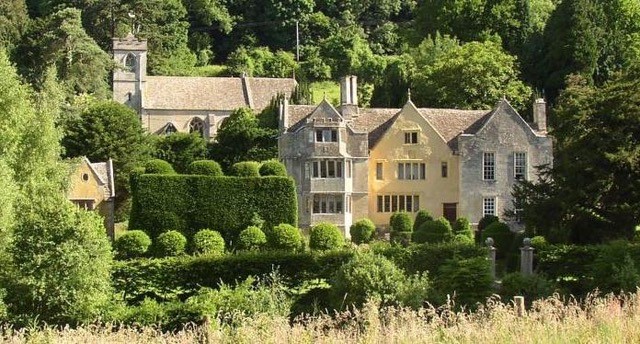 Please inform us of any dietary requirements by emailing us at friends@holburne.org.

Courtesy of the Holburne Museum’s Friends Committee, we are offering a fantastic opportunity to visit two outstanding examples of Cotswold medieval manor houses.

We will spend the morning at Owlpen, which dates back to 1450 but was carefully repaired and renovated in Arts & Crafts style in 1926 when the house was rescued after nearly a century of dereliction. The interiors include a magnificent Tudor Great Hall of 1523, an elegant early Georgian parlour and a Great Chamber with unique painted cloth wall-hangings. The gardens range from a charming hillside terraced area with yeo topiary, old roses and box parterres, and a walled kitchen garden to an ‘Old English’ garden much admired by Gertrude Jekyll.

Chavenage, or to legions of Poldark fans ‘Trenwith’ from the TV series, has its origins in the early 14th Century, as sections of the current building formed part of an Augustinian monastic community. After the dissolution of the monasteries, the estate was granted to Thomas Seymour who subsequently married Katherine Parr. The House and estate passed through several owners over subsequent centuries before being acquired by the Lowsley-Williams in 1891. Inside the house itself, we shall see the Great Hall, a fine minstrels’ gallery and fireplace, the impressive Oak Room with fluted panelling and, on the first floor, two richly decorated bedrooms.

Ticket cost includes return private coach transport, entry and private guided tour of both properties, arrival refreshments at Owlpen and a delicious two-course lunch at Chavenage. Depart from the Holburne Museum at 9am, returning at 5.30pm.