Precious and Rare: Islamic Metalwork from the Courtauld 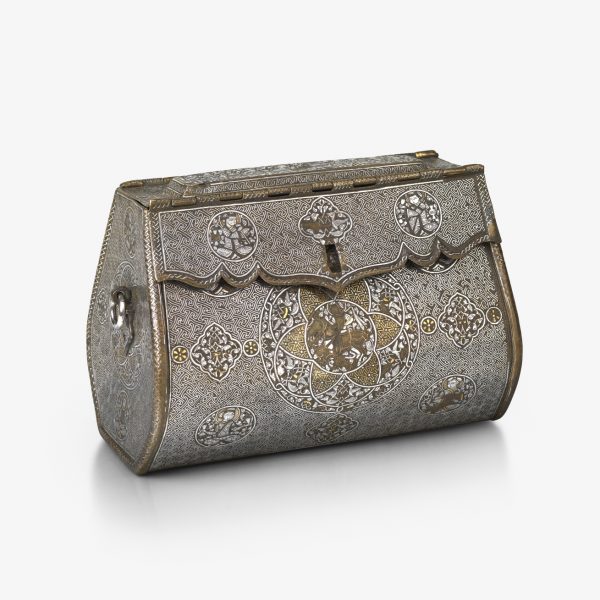 Ten remarkable highlights from The Courtauld’s world-class collection of Islamic metalwork, which have rarely left London since their bequest over fifty years ago, are now on display at the Holburne.

Dating from the 13th to 16th centuries, these objects are some of the finest examples of this intricate craft from modern-day Iraq, Iran, Syria, Egypt and Turkey.

One exceptionally rare piece is The Courtauld Bag, made in Mosul (present-day northern Iraq) in around 1300-1330 for a noble lady of the Persian-Mongol court. This bag is recognised as one of the finest pieces of Islamic inlaid metalwork in existence and the only surviving object of its kind.

Another highlight will be the exquisite bowl-shaped box signed by a craftsman known as Master Mahmud al-Kurdi. This box is the only known example with a dual-language signature, in both Arabic and Latin script indicating that it was intended for a European market.

Such was the renown of Islamic metalwork in Europe during the Renaissance that Venetian craftsmen attempted to compete with the beauty and magnificence of these objects by creating imitation pieces. This show will also include examples of  Venetian inlaid work, a dish (c.1530-50) with the coat of arms of the Sagredo family, and a pair of candlesticks (early 16th century) exploring the role of Venice as a pivotal juncture between the Eastern and Western Mediterranean.

Don’t miss our free online talk, 7pm 24 June, exploring Islamic art with Dr Sussan Babaie Professor of the Arts of Iran and Islam at The Courtauld.

Admission to this display is included in your General Admission Ticket.

The exhibition has been made possible through a collaboration between The Courtauld and the Subject Specialist Network (SSN) in Islamic Art and Material Culture at Birmingham Museums Trust, and with support from Art Fund. Supported at the Holburne by the Barakat Trust