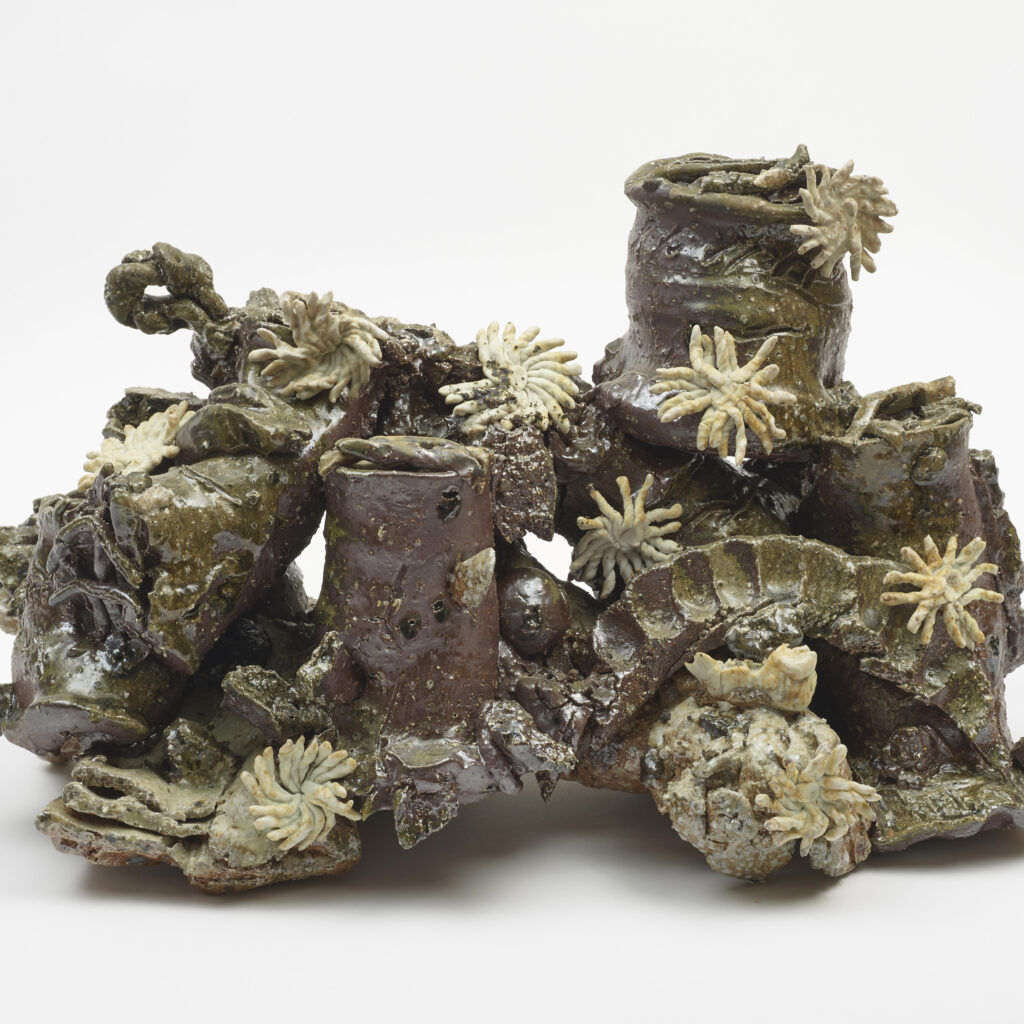 This display is drawn from a firing at Dr Robin Wilson’s Oxford University Kiln Project, an anthropological investigation into this type of ancient pottery kiln, which originally dates from 5th-century Japan, and its continued use by modern practitioners.

‘Anagama’ literally means ‘cave kiln’ and unlike other firings, the works enter the anagama unglazed. The long wood-firing – the kiln was refuelled every six minutes for sixty hours – and the build-up of ash within an open chamber creates an atmospheric glazing from which the organic material is burned off, leaving its mineral content to vitrify and settle on the pots.  Both artists regard the physical act of firing as an artwork in itself, an act of devotion and labour.

The Holburne exhibition includes two new bodies of ceramic sculptures from each artist. Angell brings forms that repeat across his practice, such as the frog and the engine block. Claydon looks to Japan’s co-option of ceramic traditions during World War Two; where upon running low on metal stocks due to the Allies cutting off their supply lines, the Japanese Government ordered master ceramicists to build ceramic grenades. He has produced a suite of similar wares and vases, each filled with gunpowder tea and displayed in small groups upon intricately produced laser cut and wood turned structures.

The exhibition’s 500-word title acts the final active component of this shared project, in part stemming from misreadings and mistranslations of metonymic phrases found within the lexicon of Japanese wood-fired ceramic techniques – such as ‘Kani-no-me’ which translates as ‘crab eye’ and refers to spots of melted feldspar in the clay body which erupt from the surface during the firing. This list of misnomers becomes visible and almost poetic via a lino and letterpress print produced at The Wytham Studio, this collaborative work is available to buy in the Museum shop.

The two artists will be In Conversation with Will Cooper, Curator of Contemporary Projects at the Holburne, on Zoom at 7pm 9 December.

Will Cooper says, “I’m delighted to be able to share the fruits of Aaron Angell and Steven Claydon’s recent anagama kiln firing with the Holburne’s audience. While disparate in their individual treatment of works, Claydon and Angell share a rich and impassioned understanding of the history of ceramics rooted in an appreciation (with a healthy skepticism) of British studio potters. Drawing on experiences at the Leach Pottery in St Ives and the firing at Dr Robin Wilson’s Oxford Kiln Project Hornet, Hailstone, Crab Eye… etc. brings the best contemporary thought and process to a traditional craft technique.”

Steven Claydon (b. 1969, London, UK) is a London-based sculptor and musician and has performed and shown work internationally, including at Tate Modern and Switzerland’s Art Basel. He trained at Chelsea School of Art and Design and Central Saint Martins. Steven Claydon describes sound as sculpture and approaches this medium through the senses – combining light, smell, and sound with solid materials to produce artworks that are often not what they might seem on first encounter. A collector of cultural artefacts, Claydon repurposes objects and data into sculptures that are full of intentional contradictions. His work invites the viewer to become the excavator as objects from the past are re-conjured with contemporary materials and new technologies.