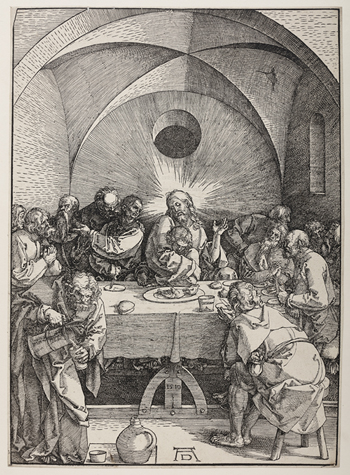 Illustrating the World: Woodcuts in the Age of Dürer coming soon

Illustrating the World: Woodcuts in the Age of Dürer
21 January to 23 April 2023

The New Year sees visitors to Bath’s Holburne Museum offered a rare opportunity to see a complete set of twelve woodcut prints by the most celebrated artist of the German Renaissance, Albrecht Dürer (1471-1528). Known as the Great Passion, the biblical images are normally inaccessible in their entirety, as they are most frequently bound into an album or incomplete. Especially for Illustrating the World: Woodcuts in the Age of Dürer, these beautiful images detailing moments in Christ’s Passion have been framed, allowing the viewer to appreciate the full cycle.

Published in 1511, simultaneously with the Apocalypse and the Life of the Virgin cycles, the Great Passion formed what is known as the “Three Great Books”, in reference to their large format, and represents the pinnacle of experimentation in the woodcut technique.

The Holburne exhibition sets Dürer’s work into the wider context of its time through the display of 14 books whose woodcut illustrations were produced during an 80-year timespan, between 1493 and 1572, showcasing the evolution of the technique and how it was exploited for political and religious purposes.

Given that woodcut printing as a fine art was less than 40 years old, Dürer’s achievements were founded on a relatively young tradition. In Europe the woodcut technique, which had been practiced in China for centuries, only developed during the 15th-century, once paper had become more widely available and affordable. With the spread of the movable type press across Europe in the second half of the century, the evolution of woodcuts became tied to the book industry. From the 1470s woodcut illustrations started to compete with illuminated books, and this rivalry fuelled woodcut artists’ creativity and experimentation.

The lavishly illustrated Nuremberg Chronicle (1493), was part of this experimental phase and set a new standard for illustrated books, both in terms of its quality and production process. Young Dürer was an apprentice at the Nuremberg workshop while this masterpiece was being produced, possibly contributing to it. Just three years later, he would begin work on the Great Passion.

By 1495, Dürer had established his own printmaking workshop in Nuremberg, soon becoming the first artist in history to publish his own work. With the “Three Great Books” he invented a new format: a picture book with full-page illustrations, accompanied by text on the facing page, which he commissioned from the humanist scholar Benedict Schwalbe.

Dürer created the designs for the woodcuts, but whether he also cut the wood blocks is still debated. Considering Dürer’s many talents, his exposure to woodcuts from the outset of his career, and the sophistication of the blocks’ cuttings, it is tempting to think that he created them himself.

A bound facsimile of the Little Passion, a smaller format woodcut cycle, which was published on the same year as the Three Large Books, is on display alongside the Great Passion, offering visitors a fascinating chance to appreciate the development of Dürer’s style through a direct comparison.

Exhibition Curator, Dr Caterina Badan, says: “In the Great Passion Dürer’s artistic genius runs unleashed: the challenge of working with a monochrome, two-dimensional technique pushes him to new heights, pumping life into complex compositions, which he populates with vivid characters shown in a huge array of emotions, where even animals and nature partake in the pathos or witness with indifference.”

With its rise in status, the woodcut was soon recognized as a powerful tool to reach a wide public, and evolved into a medium used for civic promotion, political and religious propaganda, and the sharing of ideas and information. Moreover, the images decorating the books on display at the Holburne offer a snapshot of Germany’s socio-political scene against the backdrop of the Renaissance and Reformation.

The books are arranged thematically, complete with examples produced in Augsburg in the early 16th-century under the auspices of Holy Roman Emperor Maximilian I, in glorification of the Habsburg dynasty. Also included are various publications produced to disseminate the Protestant doctrine, including illustrated devotional books and German Bibles translated by Martin Luther and aimed at encouraging private worship.

The exhibition also features two anti-Catholic publications, including Luther’s satirical pamphlet Passion of Christ and the Antichrist, with Lucas Cranach the Elder’s (1472-1553) irreverent portrayal of the Pope as the Antichrist, contrasting his sumptuous life with the sufferance of Jesus.

Finally, Melchior Lorck’s Turkish Publication offers an accurate portrayal of life in Constantinople in the 1550s, reflecting the closer relationship between the East and the West. All of these books are embellished with woodcut illustrations which play a didactic, celebratory, provocative or simply decorative role.

Dr Badan believes there is much to enjoy and learn in this remarkable show which will, appropriately, be open before, during and after Easter 2023: “Each of these books will have a particular resonance for the art lover and the historian alike. Their role in shaping the minds of the people who read them, ultimately defining European culture as a whole, cannot be understated.”

She adds: “This exhibition also offers a chance to showcase the unsung accomplishments of the often anonymous or lesser-known artists who produced these illustrations. They frequently had the arduous task of devising completely new iconographies for themes that had never been illustrated before. With a complex narrative such as the Bible, it is interesting to see which specific verse the artist chose to translate into an image. The quality of the illustrations varies from very coarse to surprisingly complex, the mood from playful to tragic, but the constant feature is the artist’s ingenuity in finding solutions to convey a story within often tiny vignettes, through a careful selection of lines designed to be carved into a piece of wood.”

Dr Chris Stephens, Director of the Holburne Museum comments: “Illustrating the World shows an incredible moment in European history, when a single artform transcended its original purpose and became so much more than purely decorative. The exhibition also serves to remind us how, with his Great Passion cycle, Dürer was the first artist in history to devise, create and publish an illustrated book, pushing the limits of a quintessentially linear art to create vividly animated scenes.”

Woodcuts from the Schroder Collection

In April 2022 the Holburne Museum unveiled a new gallery dedicated to masterpieces of Northern Renaissance portraiture, on loan from the Schroder Collection for 20 years. The collection was assembled by four generations of the Schroder banking family, starting from the second half of the 19th-century. The Schroders were avid collectors of Renaissance works of art, and in addition to the portraits they acquired silver treasures, enamel, maiolica, bronzes, jewels, engraved gems. The prints by Albrecht Dürer and the early printed German books on display are part of this collection. They were almost all acquired in 1917 by Baron Bruno Schroder from the prestigious library of Pre-Raphaelite painter, art dealer and connoisseur Charles Fairfax Murray (1849-1919).

The Holburne Museum’s mission statement is ‘Changing Lives Through Art’, signalling its commitment to opening up the enjoyment of art to people of all ages and from every walk of life. The Holburne was founded in 1882 with the gift of Sir William Holburne’s collection of 16th- and 17th-century Italian and Dutch paintings, silver, sculpture, furniture, porcelain and diverse objets d’art of national and international significance. That founding gift has been augmented with a collection of 18th-century paintings by such artists as Gainsborough, Lawrence, Ramsay, Stubbs and Zoffany. Set within the historic Sydney Pleasure Gardens, the Museum

reopened in May 2011 after ambitious renovations and with a new, award-winning extension by Eric Parry Architects. The Holburne has since secured a national reputation as an outstanding museum which holds critically acclaimed exhibitions. Its programme of exhibitions, commissions and events sets out to bring to Bath great art of all periods and from around the world, seeking to set the art of the past in dialogue with contemporary practice in exciting and dynamic new ways.