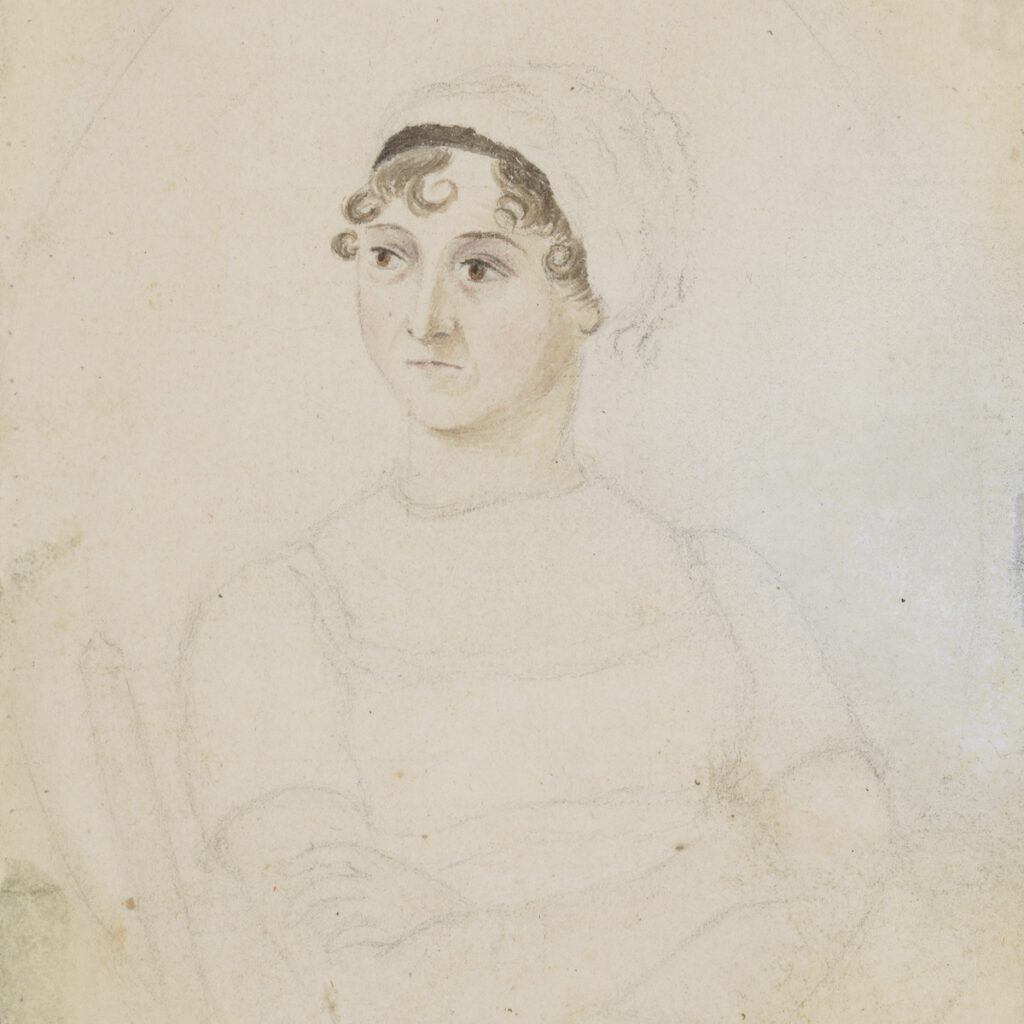 There is a unique chance to see the only widely accepted depiction of Jane Austen (1775–1817) outside London, when the sketch of the novelist by her sister Cassandra is generously lent to the Holburne Museum by the National Portrait Gallery.

Jane Austen is one of the most beloved writers in English literature, responsible for classics such as Pride and Prejudice and Sense and Sensibility. A resident of Bath between 1801 and 1806, she lived across the road from the Holburne at 4 Sydney Place from 1801 until 1804. During this time, she frequently visited Sydney Gardens and attended the public breakfasts and evening galas.

This sketch by her sister Cassandra is the only surviving memento of Austen’s features and the sole widely accepted depiction of her appearance. Although the drawing is undated and unrecorded in the correspondence between the sisters, the sitter’s age and attire suggest a date of around 1810.

As the novelist’s reputation grew after her death, the lack of a reliable portrait became increasingly challenging. In the late 19th century this sketch was turned into an engraving that, according to Austen’s niece Caroline, depicted a ‘pleasing countenance’, ‘though the general resemblance is not strong’.

This prettified representation became the accepted image of the author and, most recently, provided the basis for the £10 English note. Today, perhaps fittingly, these idealised features are instantly associated with an author whose personal life remains partially as elusive as her image.

The work is rarely lent as it is extremely delicate and light-sensitive, so this is a unique chance to see it outside of London. The portrait will be in Bath at the same time as the annual, hugely popular Jane Austen Festival (10-19 September).

Curator Monserrat Pis Marcos says: “We are delighted to show this fragile and iconic portrait of one of the most important figures in English literature, and one of Bath’s most famous residents, at the Holburne – a building she knew and mentioned in her correspondence. We very much hope Miss Austen will enjoy her summer sojourn in our Georgian galleries.”

Grand Regency Costumed Promenade
11am Saturday 11 September, from the Holburne

Jane Austen and the Art of Social Distancing – concert at the Holburne
7pm to 8:30pm Sunday 12 September

For full details and booking for of all the Jane Austen Festival events
www.janeaustenfestivalbath.co.uk

Jane Austen was born on the 16th December 1775 at the village of Steventon in North Hampshire where her father was the vicar of the small 12th century church. In 1805 Jane’s father died and so Jane, her mother and sister Cassandra moved to Southampton (during this time she would also regularly visit her brothers in Portsmouth). Jane found living in a city challenging after growing up in the countryside, so in 1809 the family moved to a house in the village of Chawton near Alton (where her brother Edward owned nearby Chawton House), which today is Jane Austen’s House Museum. In 1817 Jane became ill and moved to a house in College Street, Winchester with her sister to be closer to her doctor. She passed away on the 18th July 1817, aged just 41. A few days later she was laid to rest in Winchester Cathedral.