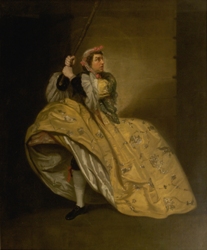 The Holburne Museum in Bath, which will reopen to the public after a major renovation on 14 May 2011, has received a major bequest of paintings from the collection of the novelist and playwright, Somerset Maugham. The collection includes important works by Zoffany, Francis Hayman and Samuel de Wilde.

Somerset Maugham started to collect theatrical paintings in 1912. He continued to build his collection through purchases at auction and through dealers and over time the collection grew until it was ‘second only to that of the Garrick Club’.  Maugham decided that, rather than allow the collection to be dispersed at his death, he would leave it to the as yet unbuilt National Theatre. However, although a number of the paintings were displayed during the 1980s at the National, the NT had neither the space nor the ability to be able securely and safely to display the collection as a whole. A selection of the paintings was subsequently loaned to the now closed V&A Theatre Museum in Covent Garden; now, after years of having no suitable home, the collection has been transferred to Bath, where it will be shared between the Holburne Museum and the Theatre Royal.

Alexander Sturgis, Director of the Holburne Museum comments, “Bath could not provide a better home for the Maugham pictures. We are an eighteenth- century city and a theatrical city and the renewed Holburne and refurbished Theatre Royal will provide the perfect surroundings. The happy division of the works between the Holburne and the Theatre will keep the collection within a short walk of each other and ensure that the whole collection will be on public display for the first time in over twenty five years.”

Lisa Burger of the National Theatre, adds, ‘We were committed to ensuring that Somerset Maugham’s superb collection remained available to the public; and are delighted that it has found an ideal home in Bath, where it can be fully appreciated once again.’

In coming to Bath the collection will for the first time be displayed to the public in entirely fitting surroundings. Many of the actors depicted in the paintings performed in the city during its eighteenth and early nineteenth-century heyday. The most important paintings in the collection including five works by Zoffany and Hayman’s painting of Garrick as Richard III will be shown at the Holburne complementing and enhancing their collection of works by their British contemporaries including Gainsborough, Ramsay and Raeburn.

“My collection was second only to that of the Garrick Club, and I had spent so many years making it that I was grieved to think that it would be dispersed at my death in Christie’s auction rooms… When at last the long efforts of a number of enthusiastic persons, striving indefatigably year after year to overcome the indifference of governments and the apathy of the public, seemed likely to be crowned with success and a national theatre would be built, it struck me that by presenting my pictures to it I might achieve the object of keeping them together.” (Somerset Maugham, 1954 from The Artist and the Theatre, Mander and Mitchenson, 1955).

Key works in the collection include:
•    The prime version of Zoffany’s painting of David Garrick and Susannah Maria Cibber in Venice Preserv’d which Maugham purchased from Christie’s for £29. It had once belonged to the great actor Sir Henry Irving.
•    Zoffany’s paintings of Charles Macklin as Shylock and Garrick as Sir John Brute in The Provok’d Wife which belonged to Garrick himself.
•    Francis Hayman’s painting of Garrick as Richard III on Bosworth Field (‘a horse a horse! My kingdom for a horse’) first exhibited at the Society of Artists in 1760.
•    A painting of an unknown subject, (showing two disputing gentlemen dressed in black) which until now has been unattributed but which has recently been identified as also by Zoffany.

William Somerset Maugham (1874-1965) was a distinguished British playwright and author; though he first trained as a doctor. His first novel Liza of Lambeth was published in 1897 and his first play, A Man of Honour was performed in 1903. He was famous before the First World War for his popular light comedies. Indeed, he was so popular that at one period, in 1908, he had four plays running simultaneously in London. After the war his work began to focus more on social issues and on more serious aspects of relationships, in plays such as The Circle and The Constant Wife. In 1928 he bought his home on Cap Ferat in the South of France. He gave up writing plays, following poor public reaction, in 1933 having written 27 full-length plays. His autobiographical work The Summing Up was published in 1938 and The Writer’s Notebook in 1949. He was made a Companion of Honour in 1954. Maugham’s plays have continued to be revived.

The redevelopment of the Holburne Museum includes the construction of a striking new extension by Eric Parry Architects and the restoration of the museum’s beautiful Grade I listed building. The Museum houses an important art collection, which includes works by Gainsborough, Guardi, Stubbs, and Turner.

Notes
The Holburne Museum is currently closed for a development project of restoration and extension. Our Grade I listed home is being lovingly restored while a striking extension designed by Eric Parry faces Sydney Gardens behind the Museum. Our project is supported by a grant of £4.3million from The Heritage Lottery Fund and many other trusts, foundations and donors. In addition to our endowment we have raised £9million and have £2million left to raise before we re-open our doors to the public free of charge on 14 May 2011.

When we re-open the Holburne will house a collection of fine and decorative arts, built around the exquisite art collection of Sir William Holburne assembled in 19th-century Bath. We hold a nationally significant collection of paintings, Renaissance bronzes and maiolica, silver, sculpture, furniture and porcelain, including important and popular works by Brueghel, Gainsborough, Stubbs and Turner. In recent years we have also established a national reputation for imaginative, scholarly and popular exhibitions.

The Holburne’s project transforms what we are able to offer all our visitors. It will make us fully accessible to all visitors for the first time, allow more of our collection to be displayed than ever before and enable us to stage far more ambitious exhibitions, offer a garden café, creative learning opportunities for all ages and a family friendly environment.