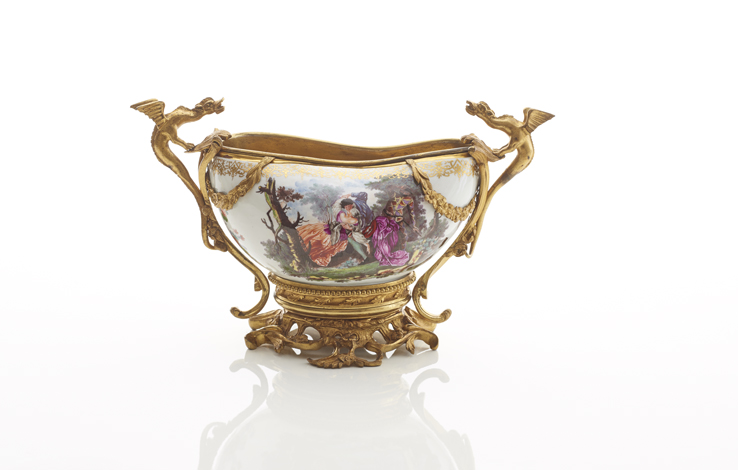 Following a fascinating conservation project one of the most unusual items in Sir William Holburne’s collection, a bourdaloue, or lady’s chamberpot, will go on display at the Holburne Museum, Bath, on Saturday 17 June.

Described in a catalogue of the Holburne’s collection in 1887 as a Bourdaloue with dragon mounts, this intriguing object has clearly undergone many transformations since it was acquired, probably as a plant pot, by Sir William. The unusual ceramic vessel with a hole cut in the base, a missing handle, and signs of an old repair was, although of good quality, too damaged to go on display. Now, following conservation, it has been reassembled and can now be seen in all its glory.

Apparently taking its name from an eighteenth-century Jesuit preacher at the French court known for his overly long yet entertaining sermons, a bourdaloue is a distinctive oval-shaped portable chamberpot designed for a lady’s convenience.

The porcelain bourdaloue itself was made at the Meissen Porcelain Factory, the great manufactory of Augustus the Strong of Saxony, in 1735-40. The shape was designed by important modeller Johann Joachim Kändler. The missing handle would originally have featured the mask of a character from the Commedia dell’Arte, as on the only other known example of the shape.

New research by the Holburne’s Curator of Decorative Arts, Catrin Jones, has revealed the importance of this piece. It is an outstanding example of Meissen’s painting and gilding at this period, probably by renowned painter Johann George Heintze, and features scenes of gallant couples. The scene on one side is taken from Jean-Antoine Watteau’s painting, La Surprise (c. 1718), engraved by Benoît II Audran. The other side takes its decoration from the fables of La Fontaine, who translated Aesop’s fables into French.

Inside is hidden a tongue-in-cheek reference to its function: ‘Aux Plaisirs des Dames’, or ‘For the lady’s pleasure’, in elaborate gold lettering. The gilt-bronze dragon mounts, floral swags and base and the gilded brass liner were made in the nineteenth century, and include cast pieces in a number of different styles, toned with gold to appear as though they match. The combination of these mismatched parts is an example of a dealer giving new life to a broken pot, adapting and piecing together parts to make a new and extraordinary creation.

“It is likely that Sir William Holburne bought the bourdaloue fully assembled, so he probably never saw the inscription that was hidden inside, and so never understood the original purpose of this pot,” says Catrin Jones. “Perhaps he used it as a plant pot – there are certainly examples of people mistaking a bourdaloue for a gravy boat!”

The beautifully conserved bourdaloue will be on display from Saturday 17 June. 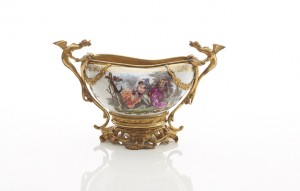