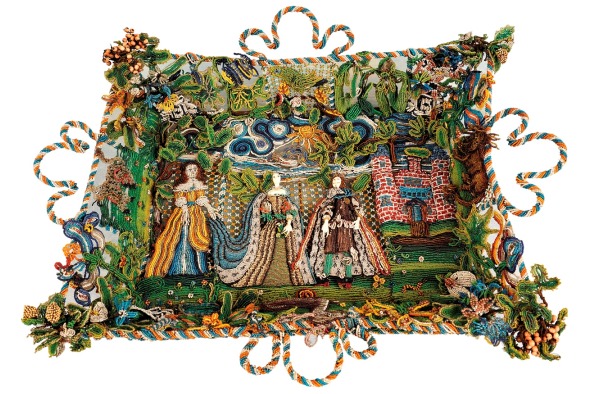 Three spectacular new acquisitions and loans for the Holburne Museum

Saved for the nation: a delightful beadwork basket seduces the public

The Holburne Museum is delighted to announce that due to the generosity of hundreds of members of the public, plus a number of trusts and foundations it has raised the money to secure the acquisition for its permanent collection of a rare seventeenth-century beadwork basket.

The Museum has been campaigning since April to buy this work and successfully raised the £78,000 required to buy the basket by the purchase deadline. In addition to significant awards of £48,000 from the National Heritage Memorial Fund (NHMF) and £10,000 from the Art Fund the Museum raised £20,000 from over 400 members of the public with other trusts with significant donors including the Norie Trust, Patricia Nguyen, Polly Devlin, Pat Robertson Glasgow and Manny and Brigitta Davidson.

Alexander Sturgis, Director of the Holburne said, ‘We are really touched and delighted by the fact that so many people have rallied around to help us add this wonderfully rare basket to our collection. We are grateful to Museum visitors who have donated on site, to online contributions through DONATE and of course to the generosity of the grants we have received.’

Dame Jenny Abramsky, Chair of NHMF, said: ‘It’s easy to see why this beautiful and extremely rare example of 17th Century craftwork has captured the imagination of the public, who have shown such overwhelming support. Offering fascinating and relatively unseen insight in to the craftwork of middle-class women of this period, the Trustees of the National Heritage Memorial Fund felt it was important that it was secured so that future generations can enjoy and learn from it.’

Made in England around 1665, the basket probably depicts Charles II, who had recently been restored to the throne, and Catherine of Braganza next to a castle within a leafy landscape. The figures are surrounded by many charming colourful beaded appliqués of flowers, birds, insects and animals. The composition is made from thousands of brightly coloured glass beads of varying sizes that have been skilfully threaded onto fine wires and attached to the mesh-like basket frame.

The basket was almost certainly made by an amateur girl or young woman in a Middle or Upper Class household. We know from documented sources that girls were taught the art of bead working in much the same way they were taught other forms of needlework and embroidery. Such skills were seen as an essential part of a girl’s education. It is thought that the wire frames for such baskets could be purchased ready-made, ready to receive their beaded decorations. Like embroidered silk pictures, beadwork was an expensive pastime limited to the privileged few. The glass beads were imported from Amsterdam and Venice at great expense.

The basket is on display at the Holburne and will soon enter its permanent displays to be shown alongside embroidery from the same period.

The Auriol and Dashwood Families by Zoffany

From September the display of another wonderful painting by the German-born portrait painter Johan Zoffany. The loan of the Dashwood conversation piece will bring the Holburne’s number of paintings by Zoffany to seven, the largest public collection of Zoffany’s work outside London.

The painting commemorates the marriage of Charlotte and Sophia Auriol in 1782. It shows us how the fashionable British way of life, cultivated in Bath and other cities, carried on as normal in the heat of the subcontinent: the gentlemen smoke and play chess in their wigs and breeches and the tight-laced and powdered ladies enjoy their tea and talk in the shade of parkland trees. Further details below.

The watercolour on ivory miniature measures just 5 x 4.5cm and was executed in 18th-century Bath by the accomplished artist John Lacon. Inscribed in ink on the reverse ‘Bath/ Ap. 26 1755/ Given [to] me by the ingenious Artist himself/ Mr John Lacon’, the miniature has remained for over 250 years within the same family and the Museum is delighted to welcome it back to Bath.

Relatively little is known about the highly skilled painter Lacon, besides the fact he worked in Bath the mid-eighteenth century when the city was at the height of fashion. An ever-increasing influx of wealthy individuals visited the city to use the spas and to drink the water, which they believed were capable of curing a wide range of illnesses. Many artists were working in Bath during this period of prosperity, most notably perhaps William Hoare (c.1707-1792) whose delicate pastels remained in high demand up until the arrival of Gainsborough in the city in 1758.

Amina Wright, Senior Curator at the Holburne Museum, Bath, said: “we are delighted to be adding such an important piece to our growing collection of beautiful objects made in Georgian Bath. This is a particularly early example of a Bath miniature, from the decade when artists were beginning to arrive here from all over Europe to meet the growing city’s demand for souvenirs of friends and family. We are very grateful to the V&A Purchase Grant Fund, the Art Fund, and the many individual donors who have generously made this acquisition possible.”

This autumn sees the arrival at the Holburne Museum of another wonderful painting by the German-born portrait painter Johan Zoffany.

What makes Lacon such an important resident of Bath is his entrepreneurial prowess beyond his accomplishment as a painter of portrait miniatures. It appears that the artist and his family also played a key role in the emerging entertainment industry in Bath, and established, according to Horace Walpole, a fashionable puppet-show.

Documents have shown that Lacon perhaps also worked in the medium of wax, as his mother and brothers ran a puppet-theatre in Bath and in London with a ‘fam’d Piece of Machinery of Wax Figures, Which have all the just Motions and Gestures of Human Life’. Here, Lacon fits the mould of the gentleman ‘limner’ of the mid eighteenth century, as a talented multi-faceted practitioner of the arts, much in the guise of Bernard Lens III (1682-1740), who also worked as a drawing master, curator, framer and restorer.

The 17th Century beadwork basket joins a diverse range of over 1,200 iconic objects and places which have been safeguarded by the NHMF to the tune of over £300million. These include:

The Art Fund
The Art Fund is the national fundraising charity for art, helping museums to buy and show great art for everyone. Over the past 5 years we’ve given over £26m to help museums and galleries acquire works of art for their collections and placed hundreds of gifts and bequests, from ancient sculpture and treasure hoards to Old Master paintings and contemporary commissions. We also help museums share their collections with wider audiences through supporting a range of tours and exhibitions, including the national tour of the Artist Rooms collection and the 2013-2014 tours of Grayson Perry’s tapestries The Vanity of Small Differences and Jeremy Deller’s English Magic, the British Council commission for the 2013 Venice Biennale. Our support for museums extends to the Art Guide app – the comprehensive guide to seeing art across the UK, promoting a network of over 650 museums and galleries throughout the country, and the £100,000 Art Fund Prize for Museum of the Year – an annual celebration of the best of UK museums, won in 2013 by William Morris Gallery in Walthamstow. We are independently funded, the majority of our income coming from over 100,000 members who, through the National Art Pass, enjoy free entry to over 220 museums, galleries and historic houses across the UK, as well as 50% off entry to major exhibitions.

Find out more about the Art Fund and the National Art Pass at www.artfund.org.
Please contact Madeline Adeane, the Press Relations Manager, on or madeane@artfund.org

The V&A
• The V&A Purchase Grant Fund is a government fund that helps regional museums, record offices and specialist libraries in England and Wales to acquire objects relating to the arts, literature and history.
• It was established at the Victoria and Albert Museum (V&A) in 1881 and continues to be part of its nationwide work.
• The annual grants budget, currently £750,000, is provided by Arts Council England (ACE).
• Each year, the Purchase Grant Fund considers some 200 applications and awards grants to around 100 organisations, enabling acquisitions of over £3 million to go ahead.
• Visit the website: www.vam.ac.uk/purchasegrantfund

The Holburne Museum
The Holburne Museum houses an important art collection formed by Sir William Holburne in the nineteenth-century, which includes paintings, silver, sculpture, furniture and porcelain of national and international significance. Artists in the collection include Gainsborough, Guardi, Stubbs, Ramsay and Zoffany.
The Museum reopened in May 2011 after ambitious renovations and a new extension by Eric Parry Architects. The Holburne has fast gained a reputation as one of a number of outstanding regional museums in the UK.

• Winner of the Museums & Heritage Award for the re-display of the permanent collection.
• Winner of RIBA Building of the Year, south west.
• Winner of the Civic Trust’s Michael Middleton Special Award for a restoration/extension project within a conservation area.
The Holburne Museum, Great Pulteney Street, Bath BA2 4DB
Open daily, free admission 10am to 5pm (11am to 5pm Sundays and Bank Holidays)
Tel: email: enquiries@holburne.org www.holburne.org