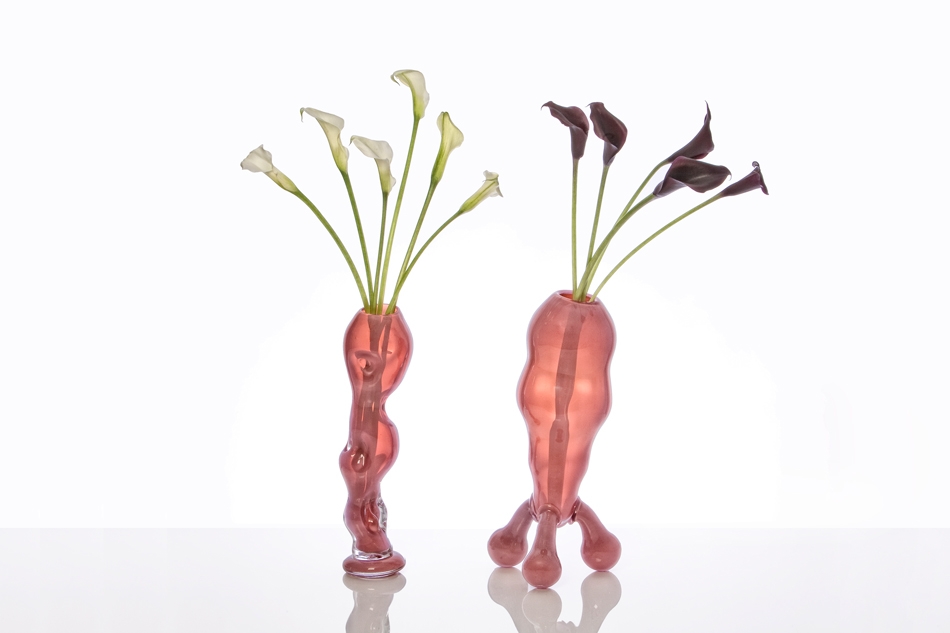 A contemporary of Antony Gormley, Richard Deacon and Tony Cragg, Nicholas Pope (b.1949) is one of the most original and under-rated artists working in Britain today. His burgeoning career was interrupted by a serious illness in the 1980s, but since then he has worked in a wide variety of materials – from stone to felted wool – to address issues of spirituality and existence in often absurd and humorous, yet poignant ways.

In Portraits of a Marriage the Holburne presents, for the very first time, ten sculptures which depict – in characteristically entertaining, abstract but honest form – the artist and his wife at different stages of their life together during more than 40 years of marriage. The series began in 1978 with Mr and Mrs Arnolfini and culminated last year (2020) with Mr and Mrs Pope Dead and Buried, which was made in the shadow of the late Janet Pope’s terminal cancer.

The exhibition encapsulates Nicholas Pope’s personal development over five decades, exploring a variety of psychological states and the nature of his relationship with Janet in sculptures of wood, metal, glass, ceramic and shrunken wool. Many of the sculptures have a related drawing, which will be displayed alongside the corresponding sculpture.

One of the later pieces in the series, Mr and Mrs Pope, Knitted, Shrunk and Hung (2012) is a somewhat shocking sight. Pope knitted the abstract representations of himself and Janet in pink mohair wool, apparently while watching evening TV, before shrinking the woollies in the extra hot-wash cycle of his washing machine and sewing the works into flattering forms. “We are both female and male, we have holes and phalluses” he once said to a bemused journalist observing Mrs Pope’s knitted flaccid protrusions and Mr Pope’s pink welcoming orifices. Closer consideration, however, reveals a gentle harmony between the two figures, with the pair suspended from the same beam, perhaps signifying the ‘ties that bind’ couples together or even just hanging like clothes on a hook.

His painted wood carving, Mr and Mrs Pope Spiked and Holed (1985) evokes a troubling episode in his life. In 1982, Pope travelled to Tanzania, to learn from the traditional Makonde carvers in Mbawala village in the Ruvuma Valley. On the flight home he began to feel unwell, initially putting it down to the after-effects of a celebratory bottle of Mount Kilimanjaro rosé. However, by the time his plane had touched down in England, he was seriously ill with encephalitis, an acute inflammation of the brain. Pope understands how ironic it is that this visit to learn how the Makonde depict their dreams and history through abstract form, whilst striking him down with a lifechanging illness also gave him a facility to increasingly depict his own life and dreams through abstract form…”.what I got out of Africa was so much more than I intended”.

The debilitating effects of his illness, and later Post Encephalitic Parkinson’s Disease, prompted a move away from Hampshire to Much Marcle in Herefordshire, where – after nearly a decade-long hiatus he adapted his working practices to fit around the times that he was strong enough to work. It was over this time that Pope’s drawings became bolder and vividly coloured…. “Like a duck floating on water I was “paddling away hard underwater…. both my images on paper and my thinking, or ndoto, continued to develop during this apparent hiatus.”

In a way, Portraits of a Marriage is both a mini retrospective of Pope’s work as one of the UK’s most notable contemporary sculptors and a love story. Visitors who themselves are in or have experienced long-term relationships will surely recognise how Pope characterizes those moments of happiness and anxiety, unity and distance in a partnership. Indeed, in 2021, Nicholas said with typical honesty: “During my entire life since meeting Janet on Platform 4, Gara du Nord, Bucuresti R.S.Romania in 1974 I’ve never stopped loving my wife, now I know it and this is the reason why we are still locked together even in death….I am bereft…..yet Janet is still with me… in my work….my ndoto. When I made Mr and Mrs Pope Spiked and Holed in 1987, depicting myself as a skull with gaping eye holes and the back of my head blown off and Janet curvaceous yet covered in spikes. l must have tested our love to its limits …” In contrast, by 1991 the aluminium Mr and Mrs Pope Melting showed the couple apparently drawing apart but inextricably locked together.

“Although born in Australia, Nicholas Pope is a graduate of Bath Academy of Art, so in a way our exhibition is something of a homecoming for him,” says Chris Stephens, Director of the Holburne Museum.

He adds: “Nick is one of the most original and under-rated artists working in Britain today. He makes sculpture in all sorts of media with an absurdist and humorous take on fundamental aspects of life. These qualities are wonderfully captured in the series Mr and Mrs Pope as… which spans a long marriage and depicts the artist and his wife at various stages of life and different phases of their marriage. There is an added poignancy as the last piece, Mr and Mrs Pope Dead and Buried, was made at such a sad time though the vibrant colours of its drawing suggest the nature of their lives together and the hope of a still bright future.”

Portraits of a Marriage at the Holburne Museum will coincide with other exhibitions at The Sunday Painter, London, and the New Art Centre, near Salisbury, which together offer an unprecedented overview of Nicholas Pope’s unique contribution to sculpture.