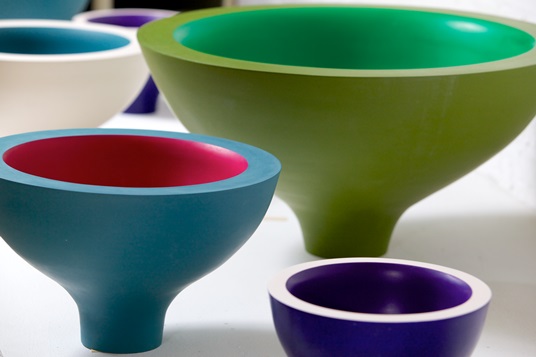 Nicholas Rena has been commissioned to create an installation of entirely new work for the Holburne’s Ballroom table; a series of monumental bowls. Orderly yet vigorous, his colourful vessels are painted and waxed to a flawless finish. The compelling sculptural forms evoke both the ceramics of Lucie Rie and still-lifes by Matisse.

Playing on the Ballroom setting, ‘with its astonishing quality of light and its rich historical resonances,’ Rena’s work explores the colours and tones of the European tradition from maiolica to painting.

Rena trained as an architect with Eric Parry, and subsequently began working with ceramics. ‘My architectural background has been a perspective in my work, a consideration and preoccupation with space.’ His solidly architectural ceramic forms recall highly polished marble. The large vessels are first moulded into their precise shapes, slowly dried out and sanded before being fired. This is the second of five contemporary interventions at the Holburne supported by Arts Council England.

Artist’s Statement
I am after a specific visual effect. Using the contrast of colour between interior and exterior, and between each of the pieces, I will strike the viewer with an 8m long complex abstract hit; the impact I am after is like that which a viewer has in the first seconds of encountering a painting, but stretched over the length of a room – that moment before the eye has time to make sense of the image. Additionally, this visual effect is tied to the motif of the bowl, an archetype that throughout my practice has been tied not just to the theme of the table but crucially to the theme of giving. The bowls are colour offerers, made as massive and emphatic as possible… The effect sought is one of determination and precision, of vividness rather than indecision; an effect, however, of anticipation rather than conclusion.