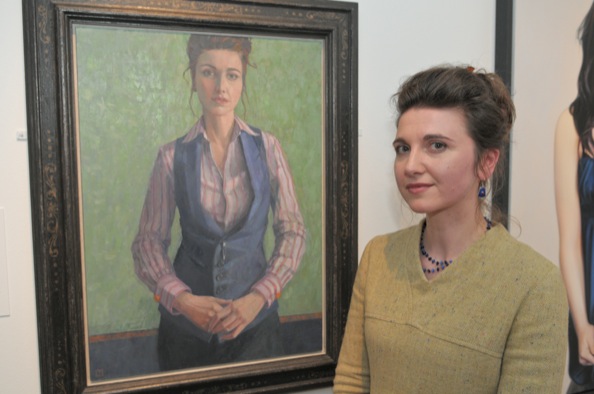 The Announcement of the Holburne Portrait Prize 2012

This year the Holburne Portrait Prize was judged by Sir Christopher Frayling, Catherine Goodman and Mike Tooby. The Judges were unanimous in their decision and were delighted to announce that Charlotte Sorapure’s ‘Self Portrait’ was the painting to which they had all gravitated and was the winner of this year’s £5,000 prize commission.

The winning self portrait was painted by Charlotte in her Bath Studio. Sir Christopher Frayling said that he had chosen this portrait, “because it told you a lot about the sitter. It is a painterly painting which speaks for itself, is quiet and self assured and reveals a real sense of the subject. He added that the exhibition, “demonstrated that the art of portraiture is alive and well, and that while photos can reveal much, they can only tell you a limited amount about the subject and the artist.”

Catherine Goodman said of the winning portrait, “It is a beautifully painted and drawn and is quietly confident which is very appealing. The standard of the competition is very impressive with a variety of styles as well as some celebrated names, in some ways this competition has more variety than other national exhibitions.”

Mike Tooby said, “Charlotte Sorapure’s Self Portrait has a hint of sadness and diffidence, a vulnerability that is difficult to achieve. The relationship of colour and tone within the portrait is very nicely done. It is a work that quietly spoke to us.”

There were two additional winners of the ‘People’s Prize’. Visitors to the Holburne’s gallery chose Ben Hughes as their favourite artist in the exhibition for his work ‘Every Cup Of Tea She Ever Had’; while online voters with the Bath Chronicle chose John Puckey for his portrait of Sir Richard Carew-Pole.

Every Cup of Tea She Ever Had by Ben Hughes