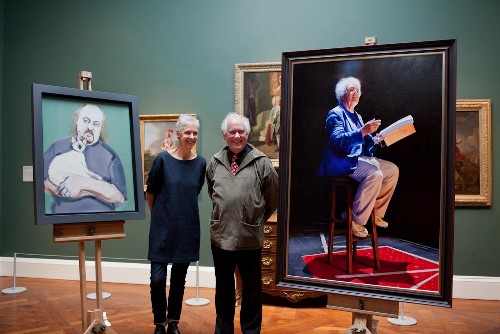 Bath’s Holburne Museum is delighted to unveil two new portraits of two west-country celebrities today. The portraits have been painted by the last two winners of the Holburne Portrait Prize and were commissioned by the Museum. The first is by 2008 prize-winner David Fisher, who chose to portray the actress Stephanie Cole; the second portrait is by the 2010 competition winner Sally Muir, and is of the comedian Bill Bailey.

Stephanie Cole said it was, ‘hugely exciting’ to have been chosen by David Fisher who has captured her likeness on stage. Bill Bailey noted that he felt it was, ‘an honour’ to have become the subject of an artwork, in addition to being, ‘delighted, taken aback and flattered’.

Both sitters are performers and used to being in the spotlight and the artists have depicted them in their very different styles. Stephanie, with script and reading glasses in hand, and Bill with one of cats nestled in the crook of his arm.

Alexander Sturgis, Director of the Holburne notes, ‘We are thrilled to welcome these two new additions to our collection. They’re very different paintings of two much loved characters and reflect the vibrancy of portraiture and the artists working in our region. We hope that their works will encourage more artists to enter this year’s portrait competition, the first in the Museum since we have re-opened.’

These new portraits will form a display in the Holburne Museum called Local Heroes which includes all the portraits commissioned from winners of the Holburne Portrait prize since its inauguration 2002. Local Heroes opens on Saturday 21 April and runs until 24 June, admission is free.

The inaugural Holburne Portrait Prize in 2002 was conceived as a way in which to allow artists to be able to paint a sitter of their choice by providing a prize commission of £5,000. The Competition is open to artists in the south west and the 2012 Call for Entries has just opened for the 2012 competition. Further information and an application form can be found on our website www.holburne.org/call-for-entries

The Holburne Portrait Prize competition was conceived in the tradition of the work of Thomas Gainsborough who firmly established his reputation as a portrait painter whilst living in Bath from 1759 to 1774. Gainsborough’s unrivalled success was financially rewarding but left little room for him to experiment. With this in mind, the Holburne thought it important that the winner of the Portrait Prize should be given the freedom to choose the subject of the new portrait commissioned by the Museum (with the proviso that the sitter is involved in the cultural life of the south west).

Funded by the £5,000 purchase prize, the works commissioned from the prize winners will gradually build up to form a collection of contemporary works alongside the Holburne’s permanent collection. This year’s Portrait Prize exhibition will run from 22 September to 14 October.