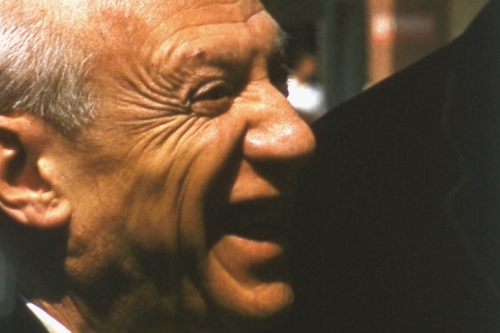 For the first time anywhere, the owner of a remarkable collection of colour photographs of Picasso, taken in 3D, is allowing them to be viewed at The Holburne Museum in Bath, England. The exhibition runs every day from Saturday 22 February to Sunday 1 June 2014. Admission and viewing is free.These amazing photographs of Picasso were taken in 1957 at his request. He was at the height of his fame and wanted to know how his works would look in 3D. The photographer, Robert Mouzillat, was a celebrated French publisher, brilliant inventor and captivating eccentric who had, with his engineer father, perfected a ground-breaking 3D camera in the 1940s. This small part of Mouzillat’s much larger collection of celebrated people and events provides a unique, intimate and vivid record of Picasso at home, in his studio and garden, and at the bullring in Arles, France.

The quality of the photographs is outstanding. They show Picasso with famous friends, family and admirers. These include his son, Paolo, and Jacqueline Rocque whom Picasso married in 1961. Also John Richardson, his official biographer, Jaime Sabartés, Spanish surrealist, Jean Cocteau, French writer and film producer, and similarly well-known people close to Picasso.

In his studio and garden it is easy to see unmistakable Picasso sculptures, ceramics and paintings. As well as Lump, his much-loved dachshund; Esmerelda, a pet goat that wandered freely through Picasso’s home and studio; and Yan, a boxer dog that was Picasso’s other pet. People, places and works of art captured and brought to life photographically through the magic of 3D and the unrestrained brilliance of photographer Robert Mouzillat. Altogether a deeply intriguing glimpse into the personal life of the world’s most famous artist.

Dr Brian May CBE, guitarist of Queen and the Chairman of the British Stereoscopic Company said, “This is an absolutely fabulous project.” May is involved personally to ensure 3D imagery published in the exhibition’s catalogue will work perfectly with his patented 3D Owl viewer.

This world premiere is taking place largely thanks to Robert Mouzillat’s daughter Elizabeth Mouzillat Jowett, and Dr Alexander Sturgis, Director of the Holburne Museum. There is no plan to hold another exhibition.

All images which contain Pablo Picasso’s rights should be cleared through DACS
Press use is considered to be moderate use of images to report a current event or to illustrate a review or criticism of the work, as defined by the Copyright, Designs and Patents Act 1988 Chapter 48 Section 30 Subsections (1) – (3). Reproductions which comply with the above do not need to be licensed.
Reproductions for all non-press uses or for press uses where the above criteria do not apply (e.g. covers and feature articles) must be licensed before publication. Further information can be obtained at www.dacs.org.uk or by contacting DACS licensing on or licensing@dacs.org.uk.
Due to UK copyright law only applying to UK publications, any articles or press uses which are published outside of the UK and include reproductions of these images will need to have sought authorisation with the relevant copyright society of that country.
Please also ensure that all works that are provided are shown in full, with no overprinting or manipulation.

In the 1940s Robert Mouzillat, an early pioneer of 3D photography, together with his father, invented two cameras and created an extensive collection of photographs and film.

Robert Gustave Mouzillat was born in Suresne in 1913 and died in Paris in 2010. As a young man he had a mixed career. He started in industry and after passing the Civil Service entrance examination in 1938, joined the French Ministry of Internal Affairs. From 1941 to 1944 he was active in the French Resistance. In May 1945 he was a member of the French Delegation under General de Gaulle and attended the first peace conference in San Francisco. He had a dual interest in education and research. In 1947 he became a director and participated in the development of publishing company Pan Books.

With the support of the board of Pan Books he developed a means of exploiting a new printing technique, combining text with images. This took him into the use of the photographic process in printing. He later formed a company, of which he was the sole owner, to conceive and develop a camera to produce precision three-dimensional photographic images, identical to those recorded by the human eye. The camera, which has itself not been overtaken by modern technology, produced colour positive images.

In 1958 his two-lens camera was presented at the Exposition Universelle de Bruxelles where it was awarded the Bronze Medal.

Robert Mouzillat’s camera takes simultaneously two photographs using two lenses from which the objects can either be the same or, with adjustable parallax, different. The available exposure speeds of the double images range from 14 to 38 images per second.
The shutter speeds range from 1-35th to 1-380th of a second. The size of each image is 12mm x 15mm the result is high quality images which are capable of being enlarged, either monochrome or colour up to 300mm x 400mm to plate making standards.

No accurate count has ever been attempted of the entire Collection but it is estimated that the “double images” total not less than 50,000. This means 50,000 “left eye” images and 50,000 “right eye” images each lens recording a view from a very slightly different angle.

There is a wide range of media in the Collection, including 3D photographs (the weekend with Picasso and the Coronation of Her Majesty Queen Elizabeth II) and film, Tin Tin gouaches and talking books.

The Holburne Museum houses an important art collection formed by Sir William Holburne in the nineteenth century, which includes paintings, silver, sculpture, furniture and porcelain of national and international significance. Artists in the collection include Gainsborough, Guardi, Stubbs, Ramsay and Zoffany.

The Museum reopened in May 2011 after ambitious renovations and a new extension by Eric Parry Architects. The Holburne has fast gained a reputation as one of a number of outstanding regional museums in the UK.
• Winner of the Museums & Heritage Award for the re-display of the permanent collection.
• Winner of RIBA Building of the Year, south west.
• Winner of the Civic Trust’s Michael Middleton Special Award for a restoration/extension project within a conservation area.

In Partnership with Bath Spa University