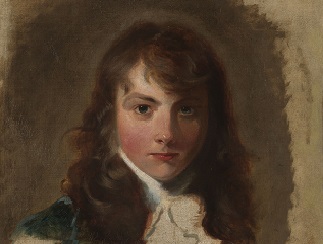 When he arrived in Bath in 1780, aged just eleven, Thomas Lawrence (1769-1830) was already being hailed as a prodigy in the mould of Renaissance masters such as Raphael, Dürer and Michelangelo.

The Holburne Museum’s new exhibition, Thomas Lawrence: Coming of Age, will focus on works made when the artist was between the ages of ten and twenty-two, giving visitors fresh insights into the early development of one of Britain’s greatest portrait painters and the range of his uniquely prodigious talent.

This focused exhibition includes some of Lawrence’s earliest and most brilliant works in pencil, pastel and oil, several of which have been rarely seen in public.

When the Royal Academy’s 22nd annual exhibition opened in April 1790, its most sensational paintings included twelve portraits by Lawrence. Visitors and critics could scarcely believe that the artist was only 20, he was due to celebrate his 21st birthday the following week; in fact, one reviewer published Lawrence’s birth certificate to prove that the creator of several of the exhibition’s most outstanding and original works had yet to come of age.

The Holburne Museum’s new show of fifteen works follows the future President of the Royal Academy over a period of twelve years, from childhood to his early-twenties. Seven of these were spent in Bath, where he learned the professional skills of a portrait painter, and five in London where, despite his youth, he produced some of his most brilliant and memorable work.

The exhibition begins in 1779 as Lawrence, the Bristol-born son of an innkeeper from Devizes in Wiltshire, makes his debut as a child prodigy in Oxford. It follows him to the competitive and colourful world of Bath, where he made friends with actors such as David Garrick and writers, including the famed diarist Fanny Burney, and other influential patrons. Bath being Bath, his sitters included some of the most famous and glamorous of British high society, including the legendary Georgiana Spencer, later Duchess of Devonshire, whose 1782 pastel on paper portrait has been kindly loaned to the exhibition by the Chatsworth House Trust.

The story ends in the early 1790s shortly before his election as a full member of the Royal Academy, aged 25.

Lawrence had demonstrated an aptitude for sketching when he was around the age of four and had begun producing saleable work aged six. It is known from the few surviving early portraits that he began working in graphite pencil, drawing quick, small-scale head and shoulder profiles on vellum. Coming of Age features several such portraits, the earliest a Head of Minerva (Private Collection) made in 1779 during his brief sojourn in Oxford, with an accomplished and imaginative profile portrait of his sister Anne, drawn in 1781 and a sketch of his cousin, Miss Hammond (both British Museum) made in the same year, which vividly captures the young girl’s character and energy.

His father, recognising his son’s artistic gifts, had taken Thomas to Oxford and London on something of a promotional tour. It was in the capital that Lawrence met the pre-eminent English painter and President of the Royal Academy, Sir Joshua Reynolds, who is said to have pronounced the youngster as his successor and, according to Fanny Burney’s account from 1780: “The most promising genius he had ever met with.”

Lawrence’s father was declared bankrupt in 1779 and the family relocated to Bath, a thriving city with a wealthy and fashionable society, which would afford the putative artist ample opportunity to demonstrate his skills and make money.

Near the time of his eighteenth birthday, Lawrence moved to London where, despite his youth, he produced some of his most brilliant and memorable work, a fine example of which is the Holburne’s own preparatory sketch for a portrait (now in the Los Angeles County Museum of Art), of Arthur Atherley (1791). Five years after leaving Bath, Lawrence exhibited his final three-quarter-length portrait of Arthur Atherley at the Royal Academy. At the time, he was just three years older than his nineteen-year-old sitter, who had recently left Eton College. The Holburne portrait of Atherley is both striking and memorable, showing the determined the youngster as he launches into the adult world.

Coming of Age charts Lawrence’s development as an artist, showing his use of different materials and burgeoning technical craft. As his ability in oil and chalk grew, he gradually abandoned pastel portraits. His last and best head in crayons is a likeness of the elderly classical scholar Elizabeth Carter (c.1788-9, National Portrait Gallery). Carter was renowned as a woman of exceptional intellectual powers but also possessed great warmth as a person, which Lawrence’s portrait evokes, revealing her combination of the cerebral and the grandmotherly, deftly using pastel to convey the soft plumpness of her face and the elaborately trimmed and starched cap, while her thoughtful expression suggests a mind tuned to higher things.

The Holburne’s Director, Chris Stephens, says: “Thomas Lawrence did as much as any other artist, before or after him, to define the age in which he lived. The Holburne is renowned for celebrating local creativity and bringing the best of world art to the region, and this is perfectly encapsulated in the study of Thomas Lawrence’s youthful works, a true Bath story. He is our very own answer to Raphael.

The exhibition was inspired by our acquisition of one of Lawrence’s greatest works, his Portrait of Arthur Atherley, 1791. It is one of a number of portraits by Lawrence of young men, and women, in their late teens, on the cusp of adulthood. This is, perhaps, a unique phenomenon of an artist portraying young adulthood when he was, himself, not much older than the sitters. It is around this idea of young people facing a rite of passage, confronting the hopes and fears of leaving adolescence for adulthood, that we find some of the contemporary resonances in Lawrence’s art.”

The exhibition is accompanied by a publication, Thomas Lawrence Coming of Age by Amina Wright. It is £16.95 and published by Philip Wilson.

NOTES FOR EDITORS
The Holburne Museum’s mission statement is ‘Changing Lives Through Art’, signalling its commitment to opening up the enjoyment of art to people of all ages and from every walk of life. The Holburne was founded in 1882 with the gift of Sir William Holburne’s collection of 16th and 17th century Italian and Dutch paintings, silver, sculpture, furniture, porcelain and diverse objets d’art of national and international significance. That founding gift has been augmented with a collection of 18th century paintings by such artists as Gainsborough, Lawrence, Ramsay, Stubbs and Zoffany. Set within the historic Sydney Pleasure Gardens, the Museum reopened in May 2011 after ambitious renovations and with a new, award-winning extension by Eric Parry Architects. The Holburne has since secured a national reputation as an outstanding museum which holds critically acclaimed exhibitions. Its programme of exhibitions, commissions and events sets out to bring to Bath great art of all periods and from around the world, seeking to set the art of the past in dialogue with contemporary practice in exciting and dynamic new ways.

With thanks to:
Ben Elwes Fine Art