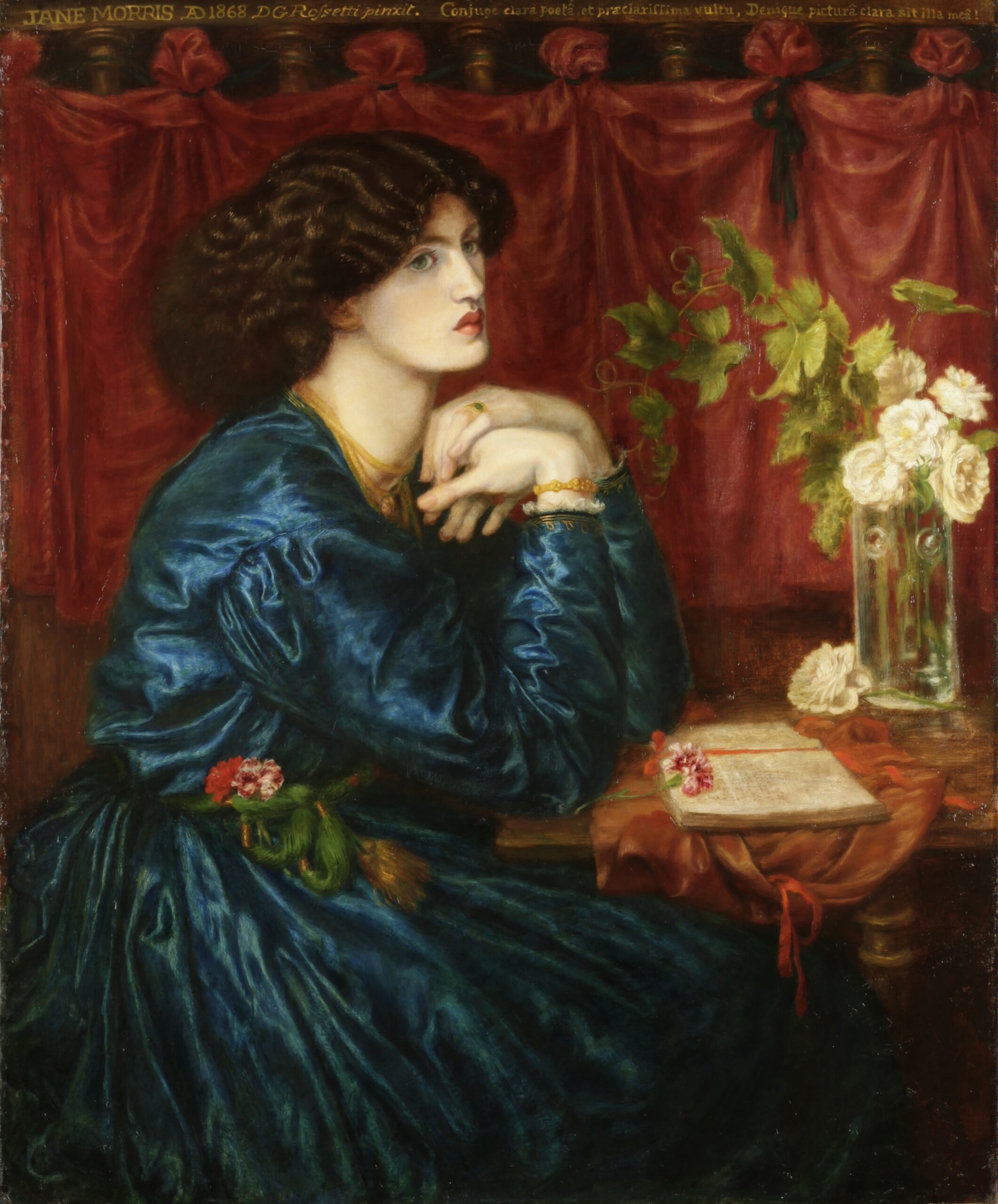 This autumn sees a unique show devoted to one of the giants of Victorian art – the first ever exhibition dedicated to Dante Gabriel Rossetti’s portraits.

Rossetti’s Portraits features some of his most iconic artworks, including The Blue Silk Dress (Jane Morris), 1868, which reveal the artist at the height of his creative powers, alongside his less well-known, but equally compelling early drawings of friends, family and fellow Pre-Raphaelite artists. The exhibition also explores the artist’s intimate relationship with his muses and their influence on his depiction of beauty.

Although founded in 1848 as a secret society, the Pre-Raphaelite Brotherhood soon became one of the most eminent artistic movements of the Victorian era with Dante Gabriel Rossetti (1828-1882) at its centre.

In the 139 years since his death, Rossetti’s appeal as a great artist has continued to increase, although the last major UK exhibition devoted to his work was staged almost two decades ago.

Rossetti will once again return to the public’s attention with an exhibition that surveys his distinctive use of portraiture, which blurred the boundaries between literary, mythological and symbolic subjects and the models whose likenesses are represented, especially the women closest to him.

Combining paintings, drawings, and photography from across the artist’s career, including some of his most celebrated and accomplished works, Rossetti’s Portraits opens with drawings of his early social circle, including members of the Pre-Raphaelite Brotherhood during the early 1850s.

As young artists starting their careers, ambitious to ‘make it’ in the art world, the Pre-Raphaelites frequently practised drawing each other to improve their observational skills, as well as saving money on models. These drawings were often created out of mutual affection and were exchanged as gifts. Rossetti’s portrait of William Holman Hunt was sketched on the morning of 12th April 1853 as one of several portraits created by the group to send out to Thomas Woolner, a Pre-Raphaelite sculptor who had emigrated to Australia to try his luck on that continent.

The next section features a selection of intimate and poignant drawings from the 1850s of the artist’s wife and pupil, Elizabeth Siddal (1829–1862), showing the many facets of their relationship as a couple, as artistic peers, and as artist and model.

Famous for posing in John Everett Millais’ Ophelia (1851-52, Tate), Siddal modelled for several Pre-Raphaelite artists before sitting exclusively for Rossetti from 1852 onwards. Alongside her work as a model, Siddal pursued her own artistic interests and was the only woman to exhibit at the 1857 Pre-Raphaelite display at Russell Place. Rossetti made a series of beautifully intimate studies of her carrying out everyday tasks and the works displayed at the Holburne allow visitors to see the daily life that ‘Lizzie’ and Rossetti shared together. Siddal frequently suffered from ill-health and a drawing he made of her during a stay in Hastings where they had gone for her to recuperate from the latest bout of illness features in the show. Siddal died tragically in 1862 aged only 32 and was buried with a batch of Rossetti’s poems. Her body was later exhumed so he could retrieve these unpublished works, further adding to his darkly romantic mythology.

Three years before his wife’s death, 1859 had seen a dramatic transition in Rossetti’s technical and stylistic approach, as he embarked on a series of idealised and symbolic female oil portraits inspired by the Venetian Old Masters. Painted through the lens of his deeply-rooted relationship with literature and art, these pictures are visions of female beauty and sensuality, embodied in the form of his next principal model, Fanny Cornforth (1835–1909). Cornforth is the focus of one of Rossetti’s masterpieces, The Blue Bower (1865, The Barber Institute of Fine Arts), a painting infused with symbolism relating to the sitter. The blue cornflowers refer to her surname, while the passion flowers suggest her fiery nature. Indeed, the work has the feel of a character study; Cornforth commands the spectator’s gaze, as if to challenge their observation of her beauty.

Rossetti’s Portraits concludes with the artist’s later, obsessive portrayals of William Morris’s wife, Jane (1839–1914), including one of the few formal oil portraits by Rossetti, The Blue Silk Dress (Jane Morris), (1868, Society of Antiquaries of London : Kelmscott Manor). She had become Rossetti’s primary muse and model from the mid-1860s and remained so until his death in 1882. They often collaborated to create works such as Blue Silk Dress, with Morris adopting a slightly awkward pose that broke away from the conventions of Victorian portraiture to show the sitter with a curved back and sinuous posture familiar in many of her portraits and photographs.

Ten years later, Rossetti returned to a watercolour preparatory study of The Blue Silk Dress, which he titled Bruna Brunelleschi (1878, Fitzwilliam Museum). In a letter to Morris, Rossetti explained that he opted for Bruna Brunelleschi as a reference to her dark complexion while attempting to keep her name from being directly associated with the painting. However, just as he did with The Blue Silk Dress, Rossetti evocatively captures her luxurious dark locks, long neck, strong distinctive features and sensual lips – epitomising the ideal of Pre-Raphaelite beauty.

Enjoy this exhibition with your general admission ticket which also includes Sunil Gupta: The New Pre-Raphaelites and ceramics by Angell & Claydon.

Before you visit please read our Museum Charter and Q&A at our coronavirus page.

Your entry ticket Includes all of our Special exhibitions, temporary displays in addition to our permanent collection. Valid all day for the date you book and not timed (you can enter any time during our normal opening hours). There are no timed entry tickets.

You can book in advance here, or you can also just purchase tickets on arrival at the Museum.
Last Admissions to the Museum is 4.30pm.

Once you have booked online you will receive a confirmation email. Please show this on your mobile or smart device on entry or print it off at home and show on entry.

We look forward to seeing you.